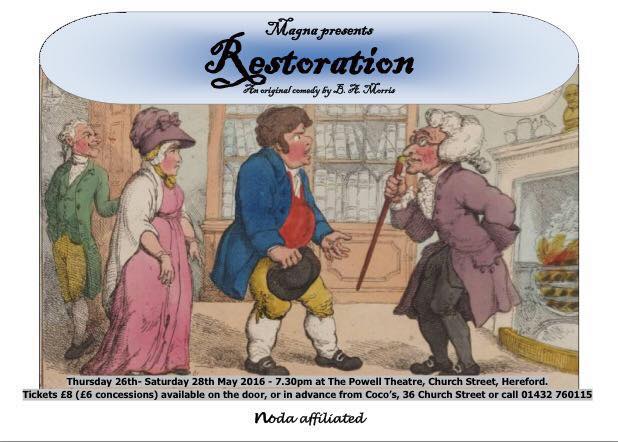 Restoration, another play penned by the very talented Betty Morris was set in the year 1750. The storyline was a great romp and focussed on a coaching house where the meeting of travellers for their business intrigue and liaisons was the ideal setting.

The cast were dressed in beautifully coloured costumes and wigs with authentic makeup and patches of the period. The pomposity of Sir Roger Poultry (David Jones) and Mr Arthur Thump (Daniel Beer) was what you would expect of the era. The young naïve couple Mr Augustus Hedges and Miss Sophia Merrydew, played by Jamie and Meghan Meadows were destined to be together and I am pleased to say that they succeeded following the usual misunderstandings.

The antics from the three ‘ladies’, Miss Georgina Squabble (Laura Gwynne) Lady Caroline Squabble (Hilary Jones) and Arabella Gaudy (Catherine Donativo) were very funny and dressing as men and assuming their persona was a nice twist and their interaction was pacey taking the audience along with them in their subterfuge.

Tilly, Lady Caroline’s Maid played by Charlotte Gwynne and Scrubby, the pot boy, played by Andrew Jones were lovely parts and so well played by the young cast members. They stayed in character throughout even when hiding under the table; it was hard not to focus on them as they were very creative in their actions.

Everyone involved in this production did a grand job and it was a delightful evening, thank you Magna.