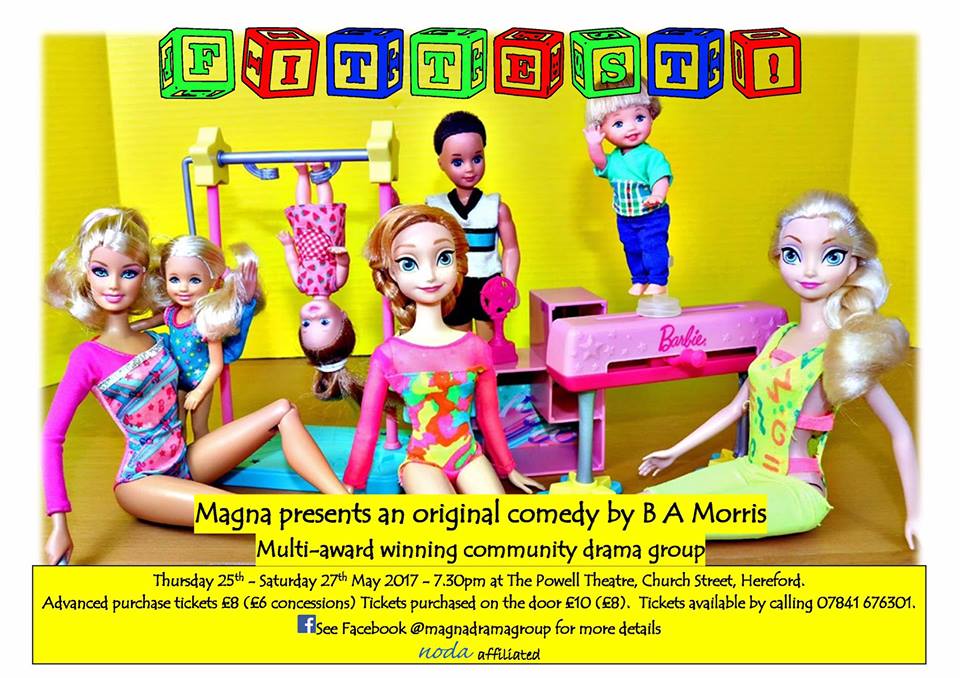 This is the third play, written by the amazing Betty Morris, set in the imaginary ‘Sparkle Deluxe Spa and Health and Club’. In true farce fashion, chaos reigned at a nice rapid pace from the moment the play started and what a giggle we had. That’s not quite correct as we had some real laugh out loud moments.

I can honestly say that there was so much going on that     I was not sure who to watch at times; great direction had every cast member doing something every time they were on. I loved Dan Hoskins as the apprentice chef, breaking into song with some highly creative dance moves as he cleaned the tables, not to mention his face when he was told to do three things all at once. Maureen Baker reprised her Irish character Angie as the completely pickled cook. Paul Oliver was convincing as the nightmare club member who, on damaging his ankle, did a brilliant job of changing his leg every two minutes until the audience (let alone himself) couldn’t remember which one was supposed to be injured. Daniel Beer was perfect as the Health Inspector; his stoicism was highly amusing.

Sarah Hare again played the indomitable Health club owner, Helen Sparks. How she kept a straight face when she was drinking what she thought was a new line in coffee flavours, I’ll never know. The audience was in fits of laughter at the improbability of the situation but it was very cleverly acted out with the said cup being slickly passed from one to the other. Hilary Jones was again Magda the Russian cleaner who found herself right in the thick of the action all the way though. Her energy and comic timing was brilliant and the little touches that, as I said earlier, was going on all the time had me tittering throughout.

David Jones did an excellent job as Justin, the hapless husband and father of five. This is a role that really suits David and he gave a confident performance. The interaction between him and Laura Gwynne who played Chell the receptionist was fast paced and utterly believable. Laura Gwynne was superb in this role that she has made her own. Her characterisation, delivery and timing was faultless; my sides ached during her explanation of her husband’s infidelity resulting in the arrival of ‘Jesus’ which led Helen into believing that Chell was having a breakdown. This was not helped by Catherine Donativo’s attempts to get Chell in trouble. Catherine was great as the mischievous and sneaky fitness instructor whose deviousness didn’t get her anywhere in the end. Another great performance from Catherine.

Two cameo roles from Betty Morris as Queenie and Andrew Jones as Jesus completed the line-up for this hysterically funny play set in the Sparkle Deluxe Spa and Health Club. It was a stroke of genius finishing with the macarena. I can’t wait for the next one! This production was so familiar as most of the cast slipped back onto characters they had played before; it was like putting on a favourite coat that was fresh back from the cleaners!