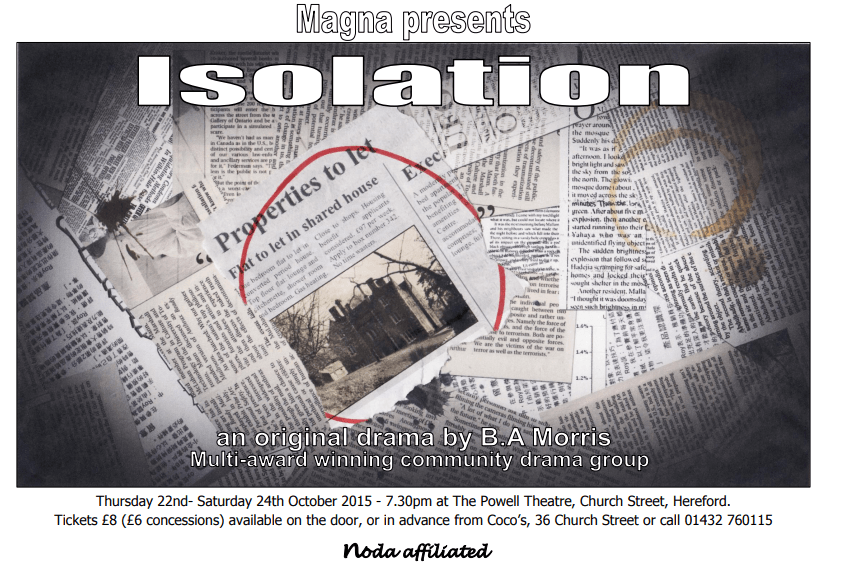 Perhaps I should explain why Magna Drama Group is unique. They are quite a small group, but in no way selective as Magna is the most inclusive group I know. They have productions for their adults, their children, and on most occasions a combination of both; this being one. The group decide arbitrarily what topic their next production should be about and then over a period of time as they develop this topic their amazing Director, Betty Morris, turns it into a play. The end result is always a remarkable, thought provoking and on many an occasion ‘uncomfortable’ experience because Magna are not afraid to look at society’s miserable failings and shortcomings and tackle it in the form of a play.

Isolation was no exception. I would really love to say I enjoyed the evening but that would be doing an injustice to the performance of the entire cast and the subject matter covered.  I felt uncomfortable, angry and sad all at the same time. The play was about various people living in a house which had been converted into flats. Whilst some of the occupants tried to lead normal lives they all had one thing in common – prejudice and bigotry. This was mainly aimed at the only sole occupant of the top flat who was a troubled and mentally ill young woman whose ‘difference’ was interpreted by everyone else in the house as someone to be feared and ridiculed. The adults use of their 5 children, to provoke the lady in question was such a sad indictment of how bad behaviour breads bad behaviour, could only end with the most dreadful outcome which it did.

This was such a powerful production and so well acted by everyone. The maturity of the children who behaved in such a cold and callous way was chilling. Thankfully they knew they were pushing their own boundaries to make it convincing. Most of the adults were downright nasty and it gave me a perverse pleasure that they got their comeuppance in the end!

I am loath to single out any one actor specifically as this was such a well-balanced performance. Everyone remained in character throughout and the Direction was superb. I particularly liked the stage direction and the use of the set which was simple yet effective. However, I thought that the pathos, timing and delivery that Laura Gwynne portrayed as the poor isolated Emily, was exceptional. Charlotte Gwynne and Shannon Jenkins were convincing as being truly spiteful as were most of the remaining cast with the exception of Meg Jenkins who played Maddy and who made me want to cry. Her understanding of what was right and what was definitely wrong was evident in her facial features and body language throughout the entire performance. This is a play that I shall remember for a very long time. Well done Magna.