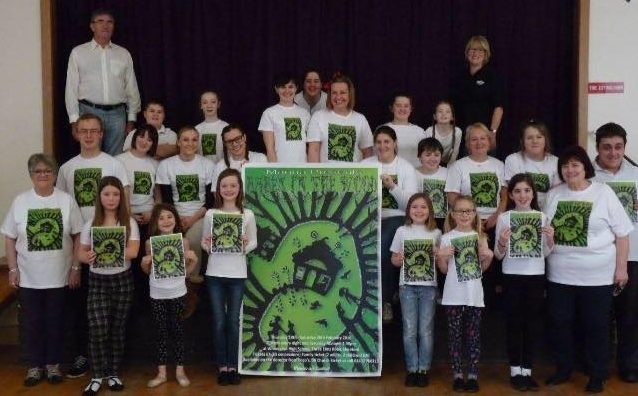 I always enjoy seeing Betty Morris’ work and it was lovely to see another of her creations.

Unfortunately due to illness there were some cast changes but this was a colourful and very enjoyable show.  It was lovely to see everyone on stage enjoying themselves especially the little ones who looked very cute.

I very much enjoyed Wilhelmina Witch, Wart and Wattle played by Cath Donativo, Hollie Moore and Laura Gwynne respectively as they were very good dancing in the musical numbers especially dancing to the music from Chicago.  I also enjoyed them picking an audience member out to come up and stand in front of a target while Wilhelmina threw knives towards the target (don’t worry they were not real knives!).

Chirpy – a champion chicken who was well played by Hilary Jones definitely had some good moves in the shake shake number and I loved the James Bond theme each time she came on.

The cast who took one some roles and those who had to move to other roles due to illness all did very well and Betty Morris did very well to do a quick change which lead her to be slightly late on stage but was covered well by the three witches and she had a lovely cheer from the audience.

All parts were well taken and I loved Terry – a talking tree’s outfit when he was turned back to a human.

There was a lovely dance solo from Theresa – a talking tree played by Charlotte Gwynne and I also enjoyed the Irish gig and am sure the cast felt very fit by the end of it!

All the musical numbers kept the feet tapping and the set and costumes were very colourful.

It was a lovely evening and thank you to Magna for inviting me to come.